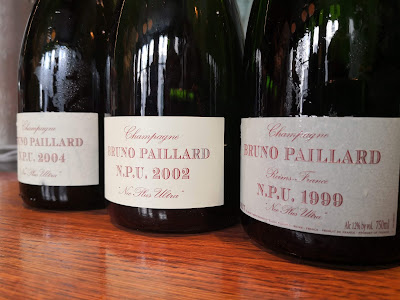 Thursday saw a preview of the seventh instalment of Bruno Paillard's flagship wine. N.P.U. stands for Nec Plus Ultra, or 'Nothing Beyond'; an apt name for a wine that touches the horizon of the Champagne style book.

Alice Paillard is a fantastically lucid, detailed ambassador for the wines, examining and re-examining them before your eyes whilst throwing out fresh observations into the room; it really is a privilege to taste with someone so familiar with the wines that they can switch the lights on in some of the further reaches of the tasting experience, especially with such singular wines.

For a brief bit of background on the house see this previous piece on the 2009 Vintage release. It was great to get as detailed a look at most of the rest of the portfolio in a comparative setting; tasting it next to the brilliant Blanc de Blancs, for example, the gear shift in intensity and sheer thickness of flavour that the N.P.U. brings is quite startling. It's a Big Champagne. But a spoof, or a brute? No.

Bruno Paillard Première Cuvée MV XB
According to Alice Paillard this is the wine her father founded the house to make. 60% comes from their own vineyards; 45% Pinot Noir from all sides of the Montagne de Reims, 33% Côte Des Blancs Chardonnay and 22% Meunier from the Eastern, chalkiest reaches of the Marne. A perpetual reserve going back to 1985 is used here in varying amounts depending on the year, and 25% is fermented in wood. This Extra Brut was disgorged in January 2019. Such an inviting nose, rich with roasted apple and yellow plum crumble. Toasted almond and apricot kernel complement the more oxidative, honeyed style here, but it is still almost forcefully lemony-fresh on the palate. This is a quite a serious, gastronomic NV. 90

Bruno Paillard Blanc De Blancs Grand Cru MV XB
40% each from Le Mesnil-sur-Oger and Oger, with 20% from the Northern villages of Avize, Chouilly and Cramant. This was disgorged in July 2017. Extra Brut again. Striking stuff, this; a more precise apple character, with lovely sweet blossom and richer lemon posset. Toasted nuts and a flash of riper, even tropical fruit lurk as well. It absolutely takes off on the palate with brilliant acidity and lift; the power of the house style is there but there is also a beautiful creamy meringue airiness to this cuvée. 93 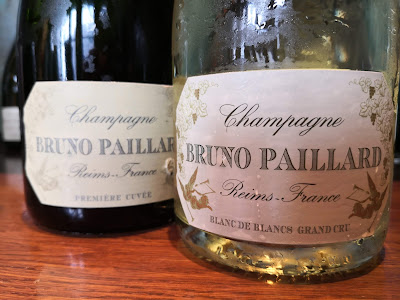 Bruno Paillard N.P.U. 2004
As with all N.P.U. releases this is 50% Chardonnay and 50% Pinot Noir. The Pinot here takes a circle around the Montagne with fruit from Verzenay, Mailly and Bouzy, whilst the Chardonnay comes from Oger, Le Mesnil-sur-Oger and Chouilly. Alice explained that 2004 featured a long ripening period; the only one since she has been there, in fact, that has met (and exceeded) the fabled 100-days-from-flowering-to-harvest rule of thumb. This spends 9-10 months in old, small oak post-fermentation (also 100% in oak, as with all N.P.U. wines). It spent 12 years on lees, and was disgorged in September 2017 with a dosage of 3 g/l.

Tremendous intensity on the nose, opening up with caramelised quince and pear before intense dried apple and buttered brazil richness enters the frame. Lovely golden flavours of rich candied grapefruit  and orange, sweet dried mango and this quite delicious sticky layer of nougat, licorice and coffee ice cream; not a shy wine! The palate has a great rush of toasted, honeyed nuts and citrus before a very lengthy grapefruit marmalade finish - fresh, for now, but this will darken deliciously. Memorable stuff - what a Christmas Dinner Champagne this would make (and you wouldn't even have to worry about the red!). 93

Bruno Paillard N.P.U. 2002
Less overtly-waxy than the 2004, this is finessed and poised with its dried yellow fruits, even pineapple-like ripeness alongside baked lemon and acacia honey. That open style is there with calvados and spice, but it is still developing and not pushing the oxidative character too hard; there's actually some interesting truffle complexity and a noticeable lightness through the palate which lifts the richer progression of toasted nuts and intense fruit. Big, but there is lovely elegance here too and a complete, tied-in kind of acidity. 94

Bruno Paillard N.P.U. 1999
This opened up with some smoky, meaty reductiveness which morphed into savoury, chestnut-toned Pinot Noir - more evident than in the other wines. It is closer to the 2004 than the 2002 in style, with that panoply of candied fruits/grapefruit marmalade style, but also a darker, autumnal kind of fruit sweetness. As Alice pointed out, it has a lovely dried fig aroma; Christmas again! I'm not sure it quite aligns and drives over the finish line as well as the other two wines, but the delicious development makes up for that. As those caramelised flavours develop it will give a lot of pleasure indeed. 92
N.P.U. 2004 Will be distributed by Bibendum Wines and available at Hedonism Wines. R.R.P. to be confirmed but in the region of £250. 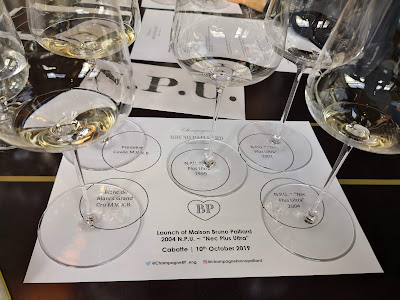