"My soil's horrible stuff, but it doesn't seem to matter..."


...said no vineyard owner ever. I wrote a piece last month examining various aspects of English Sparkling Wine, with a particular focus on site types, winemaking directions and, of course, the white stuff. I was a little overwhelmed by the responses to what was brought up; winemakers, vineyard owners and journalists were all getting in touch with questions, opinions and rumours. Turns out that, in the world of English Sparkling Wine, you could stir up a barrel-room full of Chardonnay lees with a good old soil debate.

Ian Kellett of Hambledon, long an advocate of England's chalk soils, made a very good point; I needed to take my analysis one stage further by looking not only at the number of medals per soil type, but whether those numbers actually represented an over-performance. I thought very carefully about the methodology for doing this, so I've explained how it was all calculated at the end of the article if you're interested.

Do Producers On Chalk Over-Perform in Competitions?

For the last article I looked at Gold medals for English Sparkling Wine from the Champagne varieties over the last 5 years. The competitions chosen were the International Wine Challenge, the IWSC, The Decanter World Wine Awards, the English and Welsh Wine of the Year and the Champagne and Sparkling Wine World Championships (whose 2018 results are included here). There were 215 Gold medals in total, and this time I've re-jigged the categories so that all medals could be included. The categories are for wines from:

- entirely chalk soils
- entirely another soil type
- estate-owned vineyards on multiple soils, including chalk
- largely contract/bought-in grapes that are not traceable to a soil type 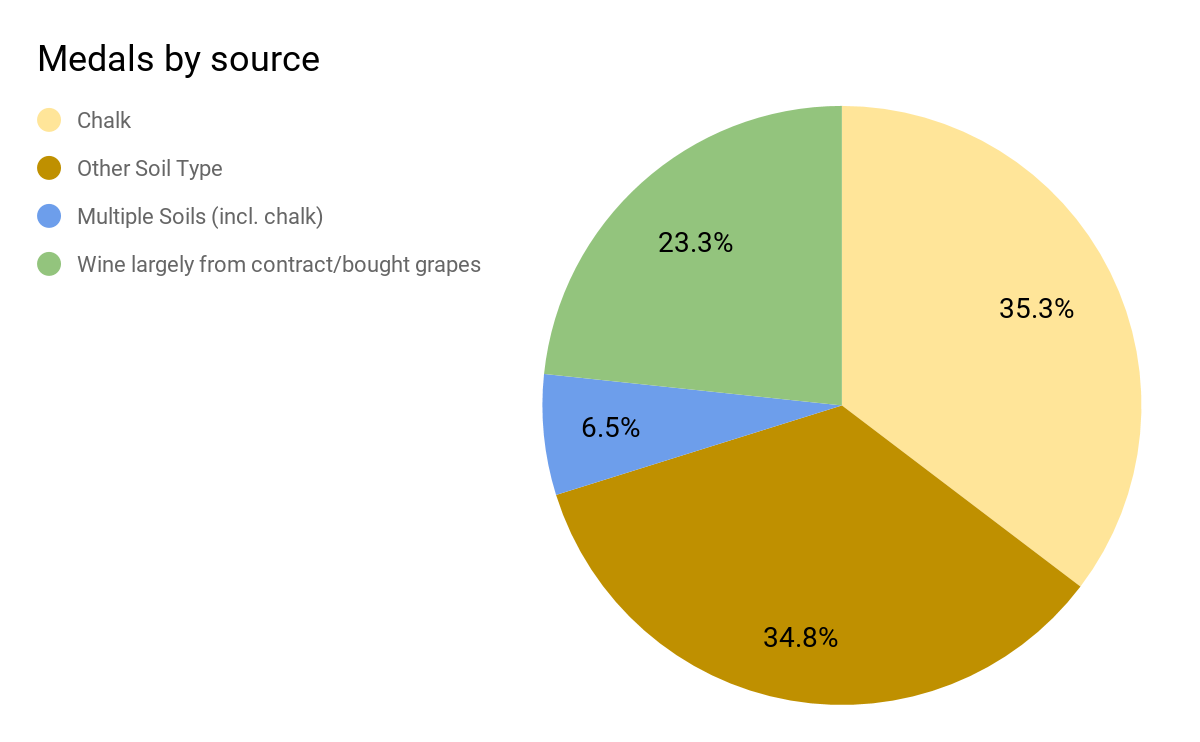 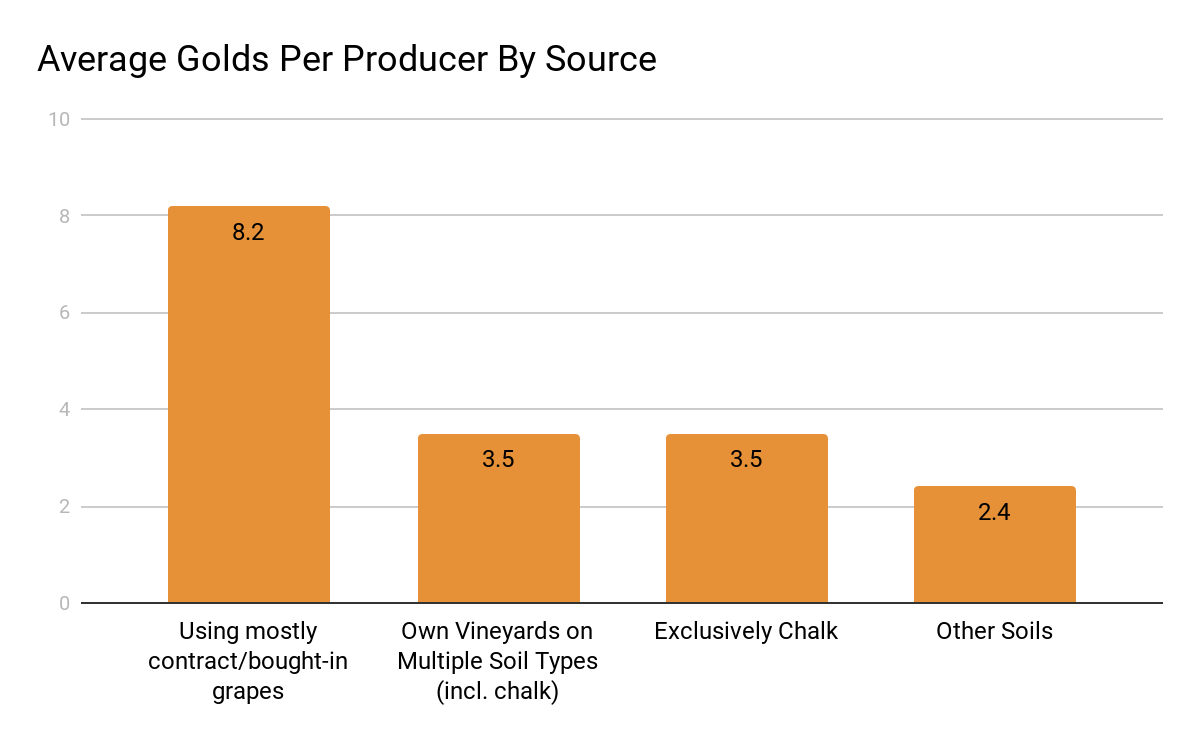 Have producers on chalk actually been over-performing? In a word - slightly. During the last 5 years, vineyards exclusively on chalk soils have averaged 3.5 Gold Medals per producer, whilst those on other soil types have averaged 2.4. Interestingly, it is the producers working with contract growers and bought-in grapes that have really been the over-performers, achieving over twice as many golds per producer as any other kind. It's not always an exact science to categorise producers, but that is surely a good argument for the quality advantages of wide grape sourcing.

Is the performance of the vineyards on chalk significant? They certainly are doing well, but it'd be brave to put their modest lead down to soil alone, for a few reasons:

In the previous article I indicated that the producers on chalk didn't seem to producing lots of medal-winning Blanc De Blancs, as one might except if we were following the Champenoise in planting patterns. To frame those results in this analysis:

So, has everyone gone as chalk-mad as we think? Firstly, a look at the general expansion since 2010. (This doesn't count 2018 plantings, and may have missed some 2017 plantings that didn't make it onto the database in time). Once again, these numbers are only for vineyards entirely or significantly planted to Champagne grapes. It is a slightly difficult thing to calculate - please see the Appendix again for the method I used. 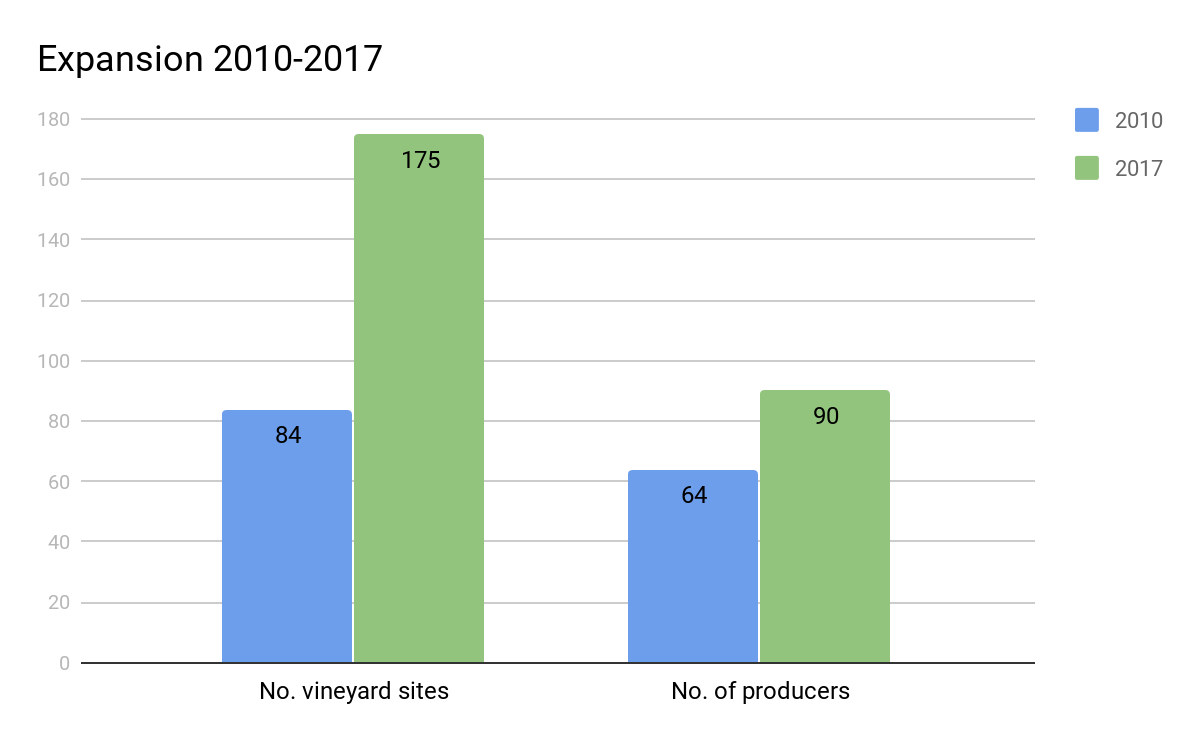 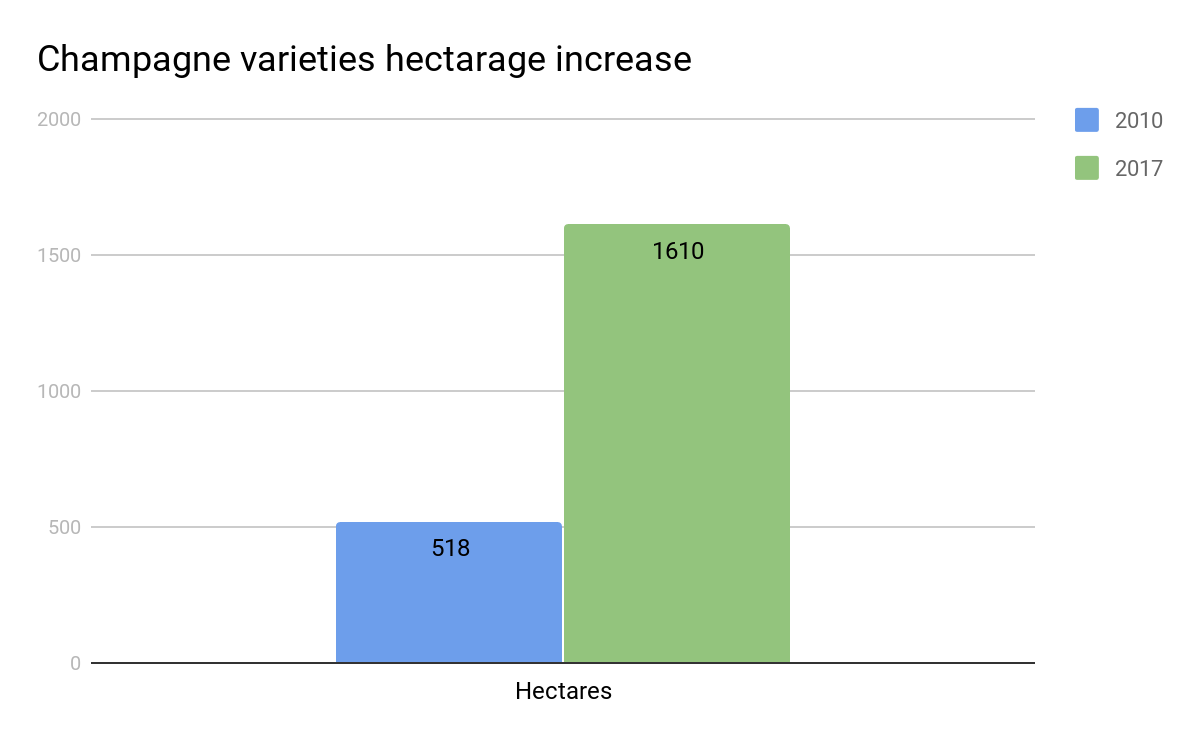 Nothing we didn't already know here - there has been a real explosion in planting, and it shows no sign of slowing down. But has there been a big move towards chalk sites? 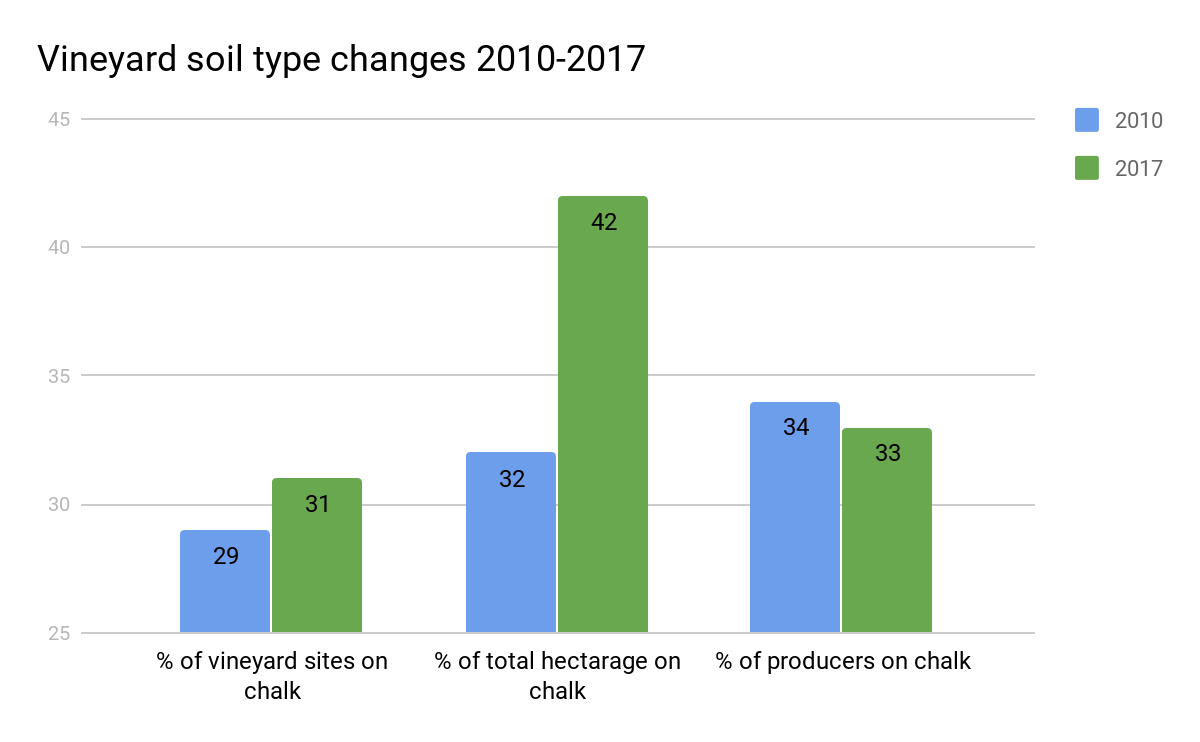 I was expecting to find that a larger percentage of the new sites chosen were on chalk, but actually what we see is a continuation of the same rough balance of site types, with a few larger producers ramping up the chalk hectarage. I would expect that chalk hectarage to keep expanding over the next few years, but perhaps we won't actually see the relative number of producers on chalk changing.

The first great rush of success for English Sparkling Wine was not based on vineyards on chalk. There isn't a lot of evidence in the glass (or in the medal cabinet) that the wines have so far been inherently superior, so does this mean that we should dismiss the Calcium Crusaders as terroir fantasists?

I don't think so. The interesting question to me is not so much whether wines on chalk will be better, but whether they will be different in ways that are actually attributable to soil. In order to learn this, we need to have producers willing to believe in soil and make wine from single soil types, just as they do in every other fine wine region of the world. Then, in 20 years, we can stand there if we like and say "Nope, soil doesn't matter in England"! The romanticist inside me hopes that won't be the case, though, and that we will start to mirror other fine wine regions in having grounds to investigate soil more deeply. When we do, though, let's do it frankly and empirically, through the lens of our own, unique climate.

As I had the data there, I thought it would be fun to list the top performers. Things that stick out: 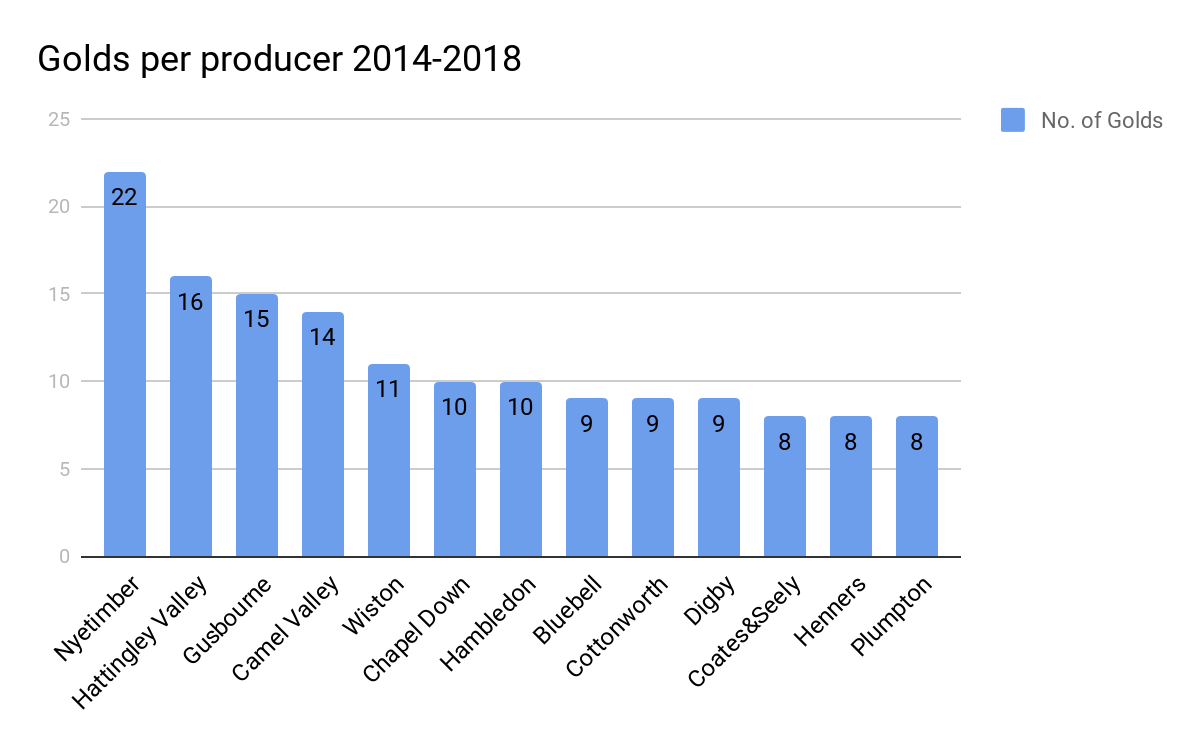 As for individual wines with the most number of Golds (across vintages for the vintage wines):


Finally, as for where the wines were made:

Here's a summary of what I've found most interesting and statistically significant over the course of the research for these two pieces:
So, if you want to be successful, plant lots Pinot Noir and Meunier if you're on chalk (and make Rosé!), plant lots of Chardonnay if you're not, and, most importantly, buy in grapes! I'm being facetious of course, and wouldn't claim that this analysis would suggest anything so concrete. What I would say is, for the industry to keep expanding whilst growing sustainable quantities of quality grapes, let's keep open minds and look for clean, clear evidence about what is really working. I'm sure we'll be checking in with some of the grander pronouncements about soil and terroir in the years to come.

Method for calculating the number of producers and Hectarage

In order to be producing sparkling wine for all (or most) of the period in which I looked at medals, vineyards would have to have been planted by 2010. I wanted to look only at serious, commercial vineyards planted exclusively or largely to Champagne varieties, so vineyards under 2Ha were excluded (unless part of a larger holding), as were vineyards that make sparkling wine out of non-Champagne varieties. Using a combination the current database, web searches and Stephen Skelton's UK Vineyards Guide (2010 Edition), I was able to work out all producers fitting this criteria that were active in this time. A few vineyards that were planted a little later have been very successful with early releases so were also included.

Denbies have large holdings of both Champagne and non-Champagne varieties, but only their 20Ha of Champagne varieties (at the time) was counted towards the overall hectarage. Gusbourne were classified as 'Multiple Soil Types including chalk' as I came to realise, since the last article, that they have had plantings on chalk producing grapes in the time being tested. Nyetimber, on the other hand, were counted as 'other soil type' as the wines being awarded were all from greensand soils.

The category of producers who use contract/bought-in fruit is designed for those producers whose model is built around sourcing grapes widely outside of their own holdings. These producers are Camel Valley, Digby, Chapel Down (although the Kit's Coty wines were counted as a separate producer on chalk), Furleigh (who use lots of contract-grown grapes, but, as I understand, only from one source), Hattingley Valley (although it is hard to tell how much of their production is from their own sites), Hoffman and Rathbone, and Ridgeview. Many others buy grapes to supplement production from their own sites in lower volumes, but this is hard to discover and I have taken producers at their word when it comes to the source of their wines.

As for the hectarage figures, these do differ slightly from other figures I have seen. I have worked backwards, using individual producer's figures from the UK Vineyards Guide 2010 and the current UKVA (WineGB) database. In a few cases there have been estimates as to the percentage of a producer's planting that is Champagne varieties; at most this brings in an error margin of around 20-30Ha.

This time, I have counted every single Gold, rather than discounting the 10-or-so repeat medals for the same wine in the same competition.

P.S.
It is worth noting that I have come across a few examples of publicity that is slightly misleading (or at best optimistic) from producers. I've found examples of producers dropping their site elevations, claiming southerly exposures that aren't there, claiming all their wines spend a certain time on lees when that time has not even passed between harvest and release, and even claiming that all their wines are estate-grown when another vineyard openly states that it grows grapes for them! That's a subject for another day though.