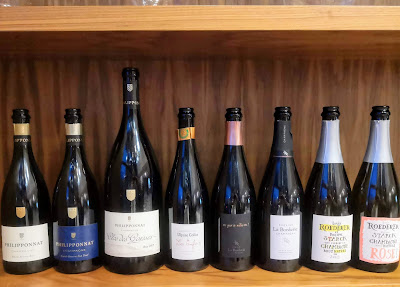 The Institute of Masters of Wine hosted Champagne writer Essi Avellan last week to discuss low and zero-dosage wines. Two large houses that have moved into Brut Nature production were represented by Jean-Baptiste Lécaillon of Louis Roederer and Charles Philipponnat of Philipponnat, whilst Simon Normand of young producer La Borderie and Olivier Collin of Ulysse Collin took the corner for the smaller producers.

Why is Champagne getting drier?

This is a question to which three producers offered up answers that were variations on a theme; climate change. However Charles Philipponnat reminded us that there was more to it than that by adding that "warmth is not the driver for lower dosage - the market is the driver." He went on explain how sugar had often been there to hide defects. Improvements in the winery have meant purer wines that deserve to be made in a pure way, start to finish. This, he noted, has coincided with increasing market demand for low-sugar wines.

This observation is at the heart of a more nuanced view on dosage. So often we hear about the opposition of sugar and acidity as if these two elements are some kind of see-saw that simply needs balancing in the middle. High acidity? You need high dosage. Low acidity? You'll be fine without! What these producers show is that dosage is part of a much more complex equilibrium.

Designing low-dosage wines from the ground up

"Sugar covers up the mineral salts of Champagne".

For Collin, Roederer and La Borderie low-dosage wine is very much about viticulture in the sense that plots are specifically destined for low or zero-dosage wines. In the case of Roederer this means vineyards in Cumières specifically (and exclusively) chosen for the Brut Nature, vintage permitting, whereas Collin and La Borderie maintain low dosages across the board.

Philipponnat is different here in that it takes the unusual step of presenting its Royale Réserve both as a standard 8 g/l cuvée and a Non Dosé NV. Rather than simply bring down the dosage of the standard cuvée, Charles Philipponnat explained, he felt it was better to split the portfolio in two and offer something for everybody rather than a wine that fell between two stools. Essi Avellan noted that the two cuvées certainly challenge the concept that a wine only has one perfect point of balance.

Despite the diversity in source material and fermentation style across the producers one common thread ran through the discussion - the avoidance of oxidation. Olivier Collin, whose wines are 100% fermented in oak (and see the best part of a year in barrel before tirage) was keen to point out that they did not operate the sort of ultra-low sulphur regime beloved of some smaller producers, whereas Simon Normand of La Borderie in the Côte des Bar is a rare example of a new producer choosing to eschew oak altogether. When asked why this was the answer was simple; he dislikes the oxidative style and prefers wines with "tension and fruitiness".

Philipponnat Royale Réserve Brut NV was based on the 2014 vintage and dosed at 8 g/l. As Charles Philipponnat explained this sugar addition tended to push the fruit into "candied" territory. This was borne out with clear flavours of lemon marmalade on toast and baked stone fruits. The Royale Réserve Non Dosé NV was 2015-based and showed the effects of a warmer vintage, making exact comparisons difficult. Philipponnat explained that he "expected it to age faster and have a more cooked flavour, but in fact the opposite has happened". Despite the same disgorgement date as the dosed wine this carried a beautiful freshness of peaches in cream with fresh yellow grapefruit and a kind of bristling chalkiness. It closed out with lovely clear white butter and a gentle snap, like a song with an 'ending' rather than a fade-out. A good ending, though. The vintage might have been talking as much as anything, but I did find it more detailed than the dosed wine too. 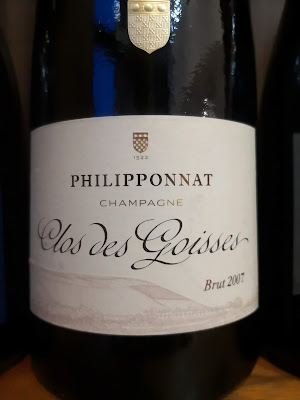 Clos des Goisses 2007 in magnum was more of a change of vehicle than a change of gear. 50% fermented in 228l oak with no malolactic (unlike the partial MLF of the Royale Réserve) this bundled its way out the glass with an arresting succession of flavours. First you get hit with smoky dried meat, dried limes*and roasted cashews before ultra-ripe lemon and exotic fruits like breadfruit and mango start to emerge. It has this concentrated, saturated flavour profile that is mirrored on the palate with a tremendous length of dried citrus. 4.25g of dosage made it the highest in the lineup (apart from the dosed Royale Réserve Brut NV), in this case combining with the cooling effect of the magnum to help frame and contain a remarkably extroverted wine.

Ulysse Collin flies the flag for the little-known Coteaux du Petit Morin with Olivier's ripe, oak-influenced style. This tasting proved just how much our perception of oak varies by context; as part of this lineup the wines appeared almost as a distinct sub-species, whereas in a lineup of similarly-styled wines (or even next to still white Burgundy) the barrel influence would probably hide in plain sight as part of a normal anatomical feature. Thanks to the careful approach in the cellar the oak contributes a certain decadence to the flavour profile without introducing the sort of toughness or oxidation that jars in some low dosage wines.

All the wines tasted were 100% Chardonnay. Les Enfers NV (3.6 g/l dosage) comes from an East-facing plot and showed welcoming apricot pastries and buttery lemon tart, full of zest and richened with turmeric and sweet wood. Les Roises NV, also based on 2013 with 3.6 g/l dosage, is more golden in style, displaying a real sense of fruit sweetness from papaya, lime and dried apricots touched with magnolia and spiced butter. Les Pierrières NV in magnum, based on 2007 with 1.6 g dosage was an integrated assembly of roasted pears, bright pineapple and stone fruit mingling with dried apple, butter pastry and peach blossom. The oak seems to have mellowed into a nice brown butter richness here, and once again the magnum effect seemed to lend extra elegance.

La Borderie, has recently undergone the metamorphosis from seller to producer. Like Cedric Bouchard, La Borderie chooses to present the generosity of Côte des Bar fruit with freshness and precision. De Quoi Te Mêles is 100% Pinot Noir made in a friendly, fresh and youthful crystallised-pear style with 1g/l dosage from a North-facing plot that they were always told wouldn't grow vines. La Confluente, consisting of 80% Chardonnay and 20% Pinot Blanc from the 2014 vintage, had a bit more in play with its ripe apricots, apple tart and perfectly pristine flavours. A harmonious wine with a nice peppery brightness. Douce Folie, a rosé de maceration made from 100% Pinot Noir, used a higher 4 g/l dosage to temper its slightly wilder, herb-tinged red cherries and strawberry tart with good tangy butter. A Champagne for the table, but not tough or heavy at all. 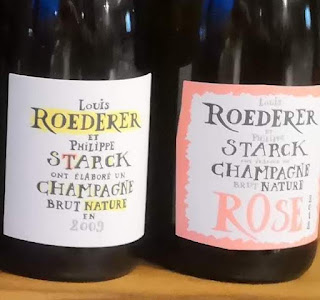 Louis Roederer and Jean-Baptiste Lécaillon have been featured here before speaking about freshness, climate change and low dosage. The difference this time was that the new Brut Nature Blanc 2012 and Brut Nature Rosé 2012 were in attendance. The remarkable success of these wines must have something to do with the fact that they are borne not out of reducing the dosage of pre-existing wines but rather from an original conception, worked backwards with customary Roederer inquisitiveness, until the entire route from the soil to glass was aligned and optimised for the Brut Nature that Lécaillon envisaged.

The Blanc, composed of 55% Pinot Noir, 25% Pinot Meunier and 20% Chardonnay sees 15% vinification in oak and no MLF. The wine is only taken to 4.8 bar pressure because higher pressures "fight with malic acid". The wine is jetted upon disgorgement (made to foam in a precise manner to avoid oxygen ingress once the crown cap is removed), which took place for this bottle in March 2019. A subtle, shifting picture of complex apple and white fruits presented with glimmering clarity alongside touches of starfruit and light, fresh baklava (something I was surprised to find in my notes, but find it I did !). An amazing length of pithy ripe citrus keeps the palate so composed for a Brut Nature, with no clamping down or narrowing.

The Rosé shares the same assemblage, but 25% of the Pinot Noir was 'infused' via a cold soak (the same method used for all Roederer rosés). There's beautiful fruit here of singed blood orange and fresh, delicate raspberry seasoned with subtle smoke and allspice. That inner freshness is there again, almost like an energy source inside the wine keeping it afloat against the odds.

We also tasted the 2009 Brut Nature which was in some ways the most remarkable wine of the flight. Many Brut Natures survive for a number of years, but not that many taste this good with three years post-disgorgement. The clarity of youth is still intact, with a pearly sheen of peach and grapefruit perfectly woven together so that nothing sticks out. The flinty freshness is there, but a little cashew just hints at some development too. There is genuine length and a finish bucks the trend for Brut Nature with acceleration and persitence.

Many thanks to Essi and all the winemakers for a superbly thought-provoking afternoon. Santa Claus also saved himself a few kilos on his London leg as I managed to pick up a copy of the new Christie's World Encyclopaedia of Champagne and Sparkling Wine, co-authored with Tom Stevenson, signed by Essi. Cheers!