Hambledon And The Road to Low-Dosage English Sparkling Wine


The village of Hambledon in Hampshire is home to a modest hill that became the nucleation point for the revival of the English wine industry in the 1950s. Fortunes ebbed and flowed over the years, but since Ian Kellett took ownership of the property in 1999 the focus has been on Sparkling Wine: first,  the replanting of the original site, then acquisition, expansion and no shortage of investment in winemaking facilities. Today, Hambledon once again stands as one of the most important producers in the country.

There has long been a cross-channel connection here; this is Hampshire-sur-Oger on account not only of the fine Upper-Cretaceous chalk beneath the vines but also the accents heard behind the cellar doors. Champagne man-of-the-moment Hervé Jestin has been head winemaker since day one, despite an ever-increasing number of feathers appearing in his bow; with his role in the revival of Champagne Leclerc-Briant in full swing (as well as his own Champagne and his work as a consultant on Biodynamic winemaking), the cellar is effectively now under the control of Felix Gabillet on a day-to-day basis.

Première Cuvée has always been the flagship at Hambledon. Chardonnay-led, non-vintage (thanks to around 10-15% reserve wine that sees some oak usage) and with a minimum of 48 months on lees, it always places itself at the serious end of the English Sparkling Wine spectrum. An intriguing counterpart to the Première Cuvée looks set to debut soon - the Première Cuveé Rosé tasted here.

Alongside this, my small band of bubble disciples accompanied me in tasting three iterations of the Première Cuvée; one from the original 2011 base and two from the current 2013 base. The last of these is the current release, with just 2 g/l dosage. Also tasted was the excellent entry-level Classic Cuvée. I have kept up with these wines since they first started appearing - they're now better than ever. 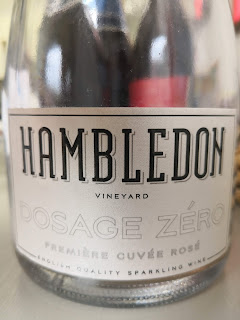 100% Pinot Meunier with 48 months on lees. The juice spends 12 hours in the press. There is certainly nothing quite like this coming from England at the moment; think plum skin, crabapple jelly and wild red cherry jam, touched by savoury nuances like tar and even dried leaves. There is a touch of light marmalade and set-honey development here too. This has avoided bitterness or extraction on the palate, normally so noticeable in very dry Rosés; thumbs up for some sensitive winemaking here. Some roundness and creaminess to the mid palate keeps the wine moving before a gentle hedgerow tartness closes it off. I'll admit to being a bit sceptical, but I think they've pulled it off! Drink young. 88

73% Chardonnay, 24% Pinot Noir, 3% Pinot Meunier. This is the current release.  Gentle apricot and subtle orchard fruits sit with some classic ripe citrus notes without being screamingly appley or lemony - I wrote Asian Pear Tart, which isn't a food that exists (to my knowledge). This has those lovely sweet anise and almond notes that I associate with precise, careful winemaking. There is perhaps a slight starkness to the finish, but the extra lees time here helps mitigate that and turn it more into a thirst-quenching snap of the tail than a wincing tartness.

This feels quite controlled at the moment, and will open up well over 2-3 years. Clearly less-developed than the other two bottles, but it was the pick of most tasters thanks to its clarity and freshness.  91

The same wine as above, from an earlier disgorgement run and with a higher dosage. Very different - some could not believe this was the same base wine. Pear tart again, this time with a bit more caramelisation alongside nice lemon meringue freshness. There is a little buttered mushroom developing, in this bottle at least. You do feel the sugar next to the 2g/l; it is integrated, the length is amplified and the acidity feels slightly suppressed. It's hard to separate on quality terms, though, as the freshness of the first bottle was so appealing. 90 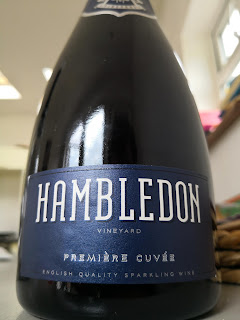 More quince and baked bread notes here. Just a touch wilder, with a slightly more obvious wild apple expression and some developed malt and honey notes. The nose is really quite interesting and attractive, but the 2013 cuvées have the edge on the palate; this is a little more jagged in places, not quite achieving the same smoothness of progression (although there is some delicious breadth of age here and quite a force of personality). I actually wrote that this reminded me a little of an English take on Pol Roger; it turns out that Hambledon and Pol Roger share some history! 88

2015 base. 53% Chardonnay, 31% Pinot Noir and 16% Pinot Meunier. The red grapes make their mark here, with a delicious savoury-toned nose of hedgerow berries, brown bread and ripe yellow fruits. Some floral sweetness, too. It'd be hard to say this wasn't as engaging as the Première Cuvée on the nose; it's friendlier but quite beautiful, with real poise on the palate (if not the intensity or length of the Première). This wine really impressed us, with some actually preferring it to the Première. The difference between the two is as much about style as anything else, perhaps. They certainly complement each other. 89

Does Low and Zero-Dosage English Sparkling Wine Have A Future?

Tasting the wines at 2g/l and 0g/l was an eye-opener. There is very little out there at that level in England; most people would point to the difficulty of balancing high English acidities and naturally lithe textures. To look for absolute balance in a zero-dosage wine is perhaps beside the point, though; you are looking for a wine that gains more in frankness, starkness and purity than it loses in balance, length or possibly longevity. Life-drawing models aren't trying to look better without their clothes on - just more interesting.

We all preferred the cuvée with 2g/l, after all. My guess is that, in this instance, we also all preferred the wine with the least development, no matter what the sugar level was. It is perhaps a fault of bubble fanatics that we always have half an eye on age-ability, mumbling with discontent when things don't seem to perform in the cellar. We forget that most Sparkling Wine experiences a shelf-to-glass time measured in hours or weeks rather than years, and that freshness will over-ride sweetness is many people's perceptions. Get those acids low enough and those flavours ripe enough, and yes, it looks like you could dig down quite a long way below the 8 g/l mark that most wines tend to hover at.

When you remove dosage, though, you taste things that you wouldn't ordinarily taste. That doesn't mean that those things are good, or somehow mystical transmissions of a special terroir; they might just be corners of the room that aren't used to having the light shone on them. Such is often the case with the espoused 'chalkiness' and 'minerality' in low-dosage wines (which the open-minded might spot in similar wines from completely chalk-free soils).

That's the point where the life-drawing session has to end. Interesting runs out of time and those nagging questions about balance, longevity and (can I bring myself to say this....?) drinkability pop up again. How will that forceful dryness hold up to food? Even very simple food can have inherent sweetness that can render low dosage wine unpalatably-tart. Will that bottle you bought as a gift for your parents at Christmas fare so well in the wine rack behind the sofa for 6 months, or will it age faster than last year's vegetable spiralizer?

With that in mind, I can certainly see other producers producing odd low-dosage bottles as points of interest in their portfolios, especially on the back of ripe vintages. I'm not sure it will be widespread, though, and I doubt that all the Hambledon future releases will suddenly take lurch downwards to über-dryness. "As low as possible" is probably not a great answer to the question of how much dosage a bottle of Sparkling Wine should have. Luckily, for those of us who predominantly choose to keep our clothes on, neither is it an answer that many appear to be offering up, for now.

-------
N.B. Some wines provided by Hambledon, some from my own cellar.
Labels: chalk English Sparkling Wine Hambledon hampshire pinot meunier