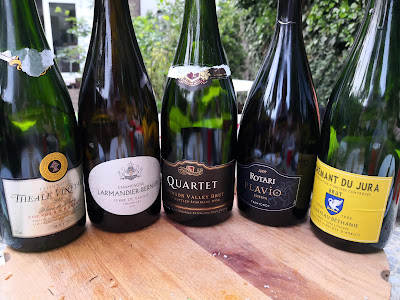 No structure, no theme (other than trying to be a bit more global) - just some bottles opened with fellow fizz disciples. They ended up being mostly Chardonnay, and we did them single blind; they ended up being pretty easy to spot for everyone, but doing it this way does focus the mind and prevent any label-based prejudices. The order was random, and all the wines were on good form, with not as much to choose between them in quality terms as you might think. Notes and scores are as written, blind.

This is an interesting wine from a tiny vineyard planted by Laithwaites near their warehouses in Theale, UK. It doesn't exist any more, but gained a bit of notoriety amongst English wine fans for producing some very smart wine. Made by Ridgeview.
---
Caramel wafers and tarte tatin off the bat, some delicious development. A little milk chocolate and some fragrant notes of juniper and citrus (quite limey). Harmonious on the nose and integrated, missing a touch of drive on the palate although there's a nice pinch of acidity. Quite open and mellow now and would possibly have been at its best 1-2 years ago - it's a bit further along than it ought to be really, but in an enjoyable way. I had to take a bit of flack from four Swedes and a Ukranian for enthusing about (what we assumed was) the English wine! 91 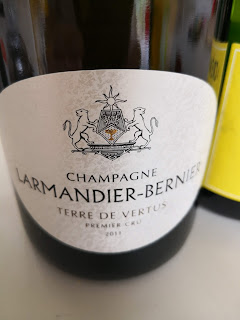 By pure coincidence the two 2011 vintage Chardonnays ended up next to each other. Zero dosage and much less post-disgorgement character made this easy to spot (and gained it more fans around the table than the Theale). I suspect it will be even lovelier in better vintages; I found it subtly excellent but missing the elan of some of the other L-B bottlings.
---
Fine pear patisserie, wild apple notes and classic toasted nuts. Has to be the Larmandier.  A sense of airiness and refinement on the palate which is quite different from the first one; it is in a fresher place. Persistence of gentle, chalky savour - perfect without dosage. A softly-spoken, elegant wine. 90

Anderson valley, California. 60% Chardonnay, 40% Pinot Noir. This divided people a little - one drinker didn't really like the slight pithy/yellow grapefruit finish. I wasn't expecting it to be quite as good as it was actually. I thought it was superb and would buy it with no hesitation whatsoever at £25.
---
Vibrant, some Pinot in there. Roederer. Smells Roederer-y! A little doughy, dried apple and a touch of white peach. Some red fruits, flirting with some sense of salty creaminess too. This is so well-made and polished! Impressive, silky mousse. Not over-ripe, but the yellow grapefruit closes in to cut the palate where the acidity moves off centre stage. Accomplished. 91

More Chardonnay. Dosed with Vin Jaune! Thought it'd be fun to stick a humble Crémant in there. One crazy person picked this as their favourite wine - it's a plucky character and a proper little fizz.
---
Farm gate apple juice, a little biscuity with some oxidative flecks, rancio butter and nuts. Not as crazy as I would have thought - the Vin Jaune character is subtle but noticeable. Attractive and fresh. Not loads of ageing character, as you would expect, but I'd have this over mediocre Champagne every single day of the week.  87 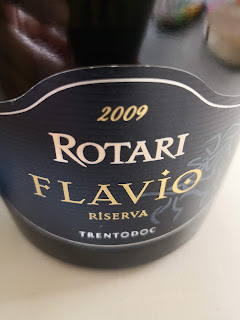 Trentodoc, Italy. Glad we had this last (purely by chance). 100% Chardonnay, 8 years on lees. It didn't need any longer on lees, and it certainly made the most of its time - it's flashy but it's very good. Bought for a silly price in Italy (around EU25). You could cause some mischief by putting this in a lineup of expensive late-disgorged wines I think.
---
Bosh! Everyone's eyebrows raised now. Buttermilk and creme fraiche, some smoky tones but also creamy peach, kiwi and masses of candied citrus. There is freshness on the palate though, which is welcome as the wine has taken on a decadent texture in bottle. It threatens blowsiness with some magnolia and blossomy notes but totally gets away with it. Perhaps a bit O.T.T. for some, but I love it. Length, complexity and a bit of swagger. 93