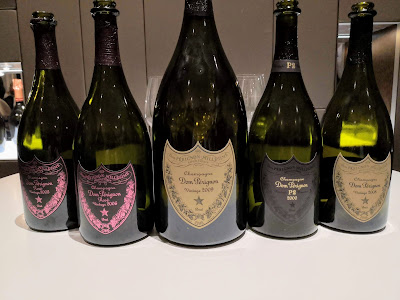 It was a treat to be part of a roomful of bubbleheads tasting our way through the current lineup of Dom Pérignon wines with Tom Harrow and the guys from Honest Grapes. There's something a bit mind-boggling about about Dom P. ; it almost exists in its own universe, living by its own rules. Tom recounted how Richard Geoffroy (the recently-retired cellarmaster whose last release is tasted below) compared the style to a Pointallist picture; you can zoom in and be fascinated by the details, the complexity of the components, the maze of flavours..or you can stand back, feeling the broader shapes and forms start to appear. This is the essence of an imperious, kaleidoscopic, fastidiously-blended Champagne and a reminder that a wine produced in numbers roughly equal to (or greater than) those of the entire English wine industry can still lay claim to a sense of character and authenticity.

The first wine we drank was Dom Pérignon 2009 in magnum. I lost my notes on this. I've tasted it in 75cl before, but the 'Magnum effect' of freshness, detail and texture really adds something to quite open, supple vintages like 2009. The second magnum opened was slightly different (and slightly better for me) - a bit more smokiness and zingy green mandarin was on show. It's a very friendly vintage; certainly the right wine to start the night with.

It feels a bit daft (or perhaps it's just hubris) to dish out scores on this sort of thing, but I do it more for my own sake than anything else - it makes me come down off the fence and decide which wines I think are 'best'. Score ranges illustrate what I think about current vs. future quality. These are long-lived wines and I think it's useful to have a sense of their potential.


Dom Pérignon 2008
The new release (released after the 2009, out-of-sequence). This is such a honed, balanced and tightly-packed wine. Fresh salty sourdough gently holds everything together; a cartload of fresh, ripe apples, pomelo, crystallised papaya, fragrant strawberry and firework smoke, outlined with some savoury sage, dried apricot and exotic floral notes. The acid line sprints off the block on the palate and drives on and on, carrying with it a lovely gentle pithiness that sends you back for more. The ruthless brilliance of this vintage really sets it apart. 95-98

Dom Pérignon P2 2000
The vintage doesn't quite have the same caliber of engine under the bonnet as the 2008, but offers up in its place the sensuousness of 16 years of lees ageing. The wonderful, crystal-clear fruit is ripe and golden, with yellow plum, apricot and expensive peach yoghurt or créme fraîche serving up a moreish, unctuous texture. Freshness and brightness pops up with posh lemon posset and candied yellow grapefruit, whilst a tiny whiff of spiced apple crumble and acacia honey creeps through the door just hinting and some future flavour development. In a lovely place 94-95/100

Dom Pérignon Rosé 2006
This is a fascinating wine, in no small part down to the character of the 23% red wine addition. Sweetness and playfulness comes from candied strawberries and pomegranate, but there's a wild sense of rosehip and redbush tea as well as salt 'n (white) pepper. The palate blindsides you, opening with delicious fruit but sliding into this amazing play of pithy, bitter pink grapefruit and savoury complexity that is joyously persistent. The Rosé recipe allows for this brilliant way of structuring vintages that perhaps don't have the sort of compelling acidities of 02 or 08. Stunning 96-98/100

Dom Pérignon Rosé 2005
The 2006 is a tough act to follow. This has even more red wine at around 29%, opening up with smoky coffee and liquorice before the raspberry and redcurrant fruit pops up with lovely delicacy. There is an exotic star anise perfume, but also a little red chicory - something for me a touch vegetal. The front end is lovely, but the harmony and progression of the 2006 is missing. 92-93
Labels: 2008 Champagne Dom Perignon vintage