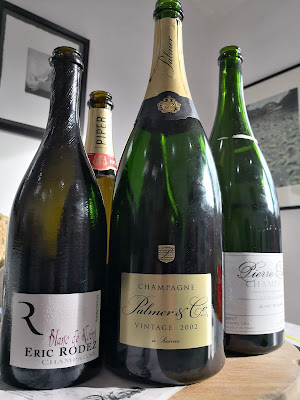 Wine is a three-way intersection; vine, place and person. Most high-quality still winemakers will humbly maintain that the first two are what really matters, and that people are there just to offer a helping hand. To make the same claims about Traditional Method winemaking would cross the line from modesty into disingenuousness. For a sparkling winemaker, the decisions made over lees ageing, disgorgement and dosage can wield tremendous powers over the wine, heightening (or sometimes dulling) the impact of the original base wines beyond recognition. Add these extra steps onto the already finicky procedure of producing a great base wine and you have a process that weaves the people involved firmly, even irremovably into the fabric of the finished article.

I don't think that acknowledging the technicality of these wines strips them of their sense of heritage or place, though - it just adds a new layer of intrigue, a wildcard, an extra colour in the kaleidoscope. When I showed some friends and fellow wine explorers some Champagnes recently, I wanted to choose a variety of wines that, as well as taking us on a short but varied tour of the region, embodied just how different the results can be as a result of winemaking decisions.

To align our palates we started with a bottle of Piper-Heidsieck Brut NV that I had cellared for a year. Before we set off on some other wines, Piper was a great way to tune into some toasty, post-disgorgement Maillard reaction flavours. Looking for anything that goes towards caramelisation as separate from the kind of biscuity. pastry-like textural development that can happen with lees age is a key to unpicking the flavour of Champagne. The Piper was also a good opportunity to discuss dosage before we set off, carrying a generous 11 g/l that plays into the toasty style so well. It is such a good wine this, amongst the best Grande Marque NVs out there. We tend to think of it as quite a rich style, but there is just a touch of reductive stoniness and some restraint too. 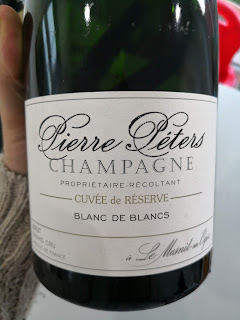 We then went on to a classic Côte Des Blancs style in Pierre Peters Cuvée Réserve in Magnum. This was a great find; based on the 2012 vintage and disgorged in 2016 it had just woken up. Lemon and green apple fruit going towards a little papaya richness and ripeness, the intensity surprised a few people (that's 2012 for you). The fresh, sweet cream on the mid-palate and the overall precision here is only boosted by being in Magnum.

Jacques Lassaigne 'Les Vignes De Montgueux' was supposed to be my Chardonnay counterpart - normally a riper, expressive and singular Blanc De Blancs from the unique chalky terroir of Montgueux in the Aube. It was, to me, deeply volatile and acetic - not pleasant. I held my tongue at first, as some of my friends accuse me of being overly-sensitive to volatility....however, even for the Natural Wine drinkers it was hard to avoid. Lassaigne adds no dosage and no sulphites at disgorging which, with this wine being disgorged in December 2017, means quite a long and treacherous road to the consumer. I find it hard to believe it was this acetic when it went into bottle so it must have arrived post-disgorgement, although it did not show overt nuttiness or development in other ways. Nevertheless, lesson learnt! 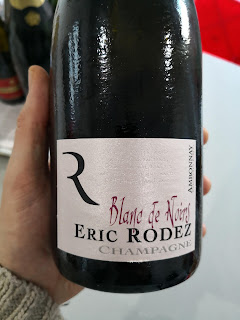 It was then off to the Montagne De Reims - Eric Rodez Blanc De Noirs NV from Ambonnay was on imperious form. It knocked everyone over. With 70% fermentation in old oak, this wine shows how to do 'vinous' Pinot Noir without submitting to oxidation or toughness. Gorgeous apricot and black cherry fruit, icing sugar and spice on the nose and an explosion of energy on the palate (no malo here). Stunner. 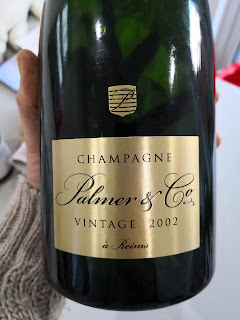 To finish we had Palmer Vintage 2002 in Magnum. I had a request for some 'old' Champagne, but don't really have anything suitable with a lot of time post-disgorgement; this was a perfect wine to illustrate some of the freeze-frame effects of lees ageing on what I always think of as a very noble, immaculately-turned out style of wine. I love that Palmer treat their Magnums completely differently to their 75Cl bottles - this had a massive 13 years on lees, disgorged again in summer 2016. It was extremely reductive at first, angrily smoky and funky. Just as I was starting to get worried it would never wake up, we left 'Guy Fawke's Compost Heap' and the lovely crystal fruits of grapefruit and lime started appearing, lucid and clear but always framed in this creamy, sourdough and marine lees character. It's quite slinky on the palate this, no blockbuster but brilliantly insistent. I think this will be at its best in 10-15 years (in Magnum).

The feeling, epitomised by writers such as Peter Liem and Robert Walters, that we don't talk enough about terroir in Champagne shouldn't be an indication that there is some kind of competition between nature and nurture to claim the credit for greatness (and everything less). Whether felt here as the blossoming of bottle-ageing flavours in the Palmer or the decision to avoid sulphites in the Lassaigne, the human touch is at the centre of these wines. If we insist on tasting the vineyard, the soil, the land, we have to learn how not to taste the winemaker. I think it's easier if, like me, you're happy to try and taste both.