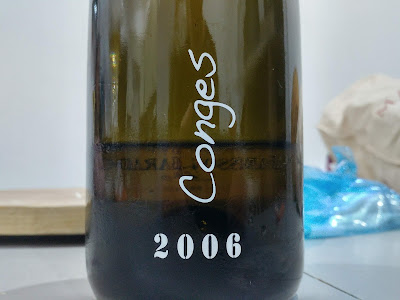 The second of a couple of fairly mature bottles from this interesting small producer. Conges is 100% Meunier from a single vineyard, fermented entirely in old oak with no malolactic and 2 g/l dosage. I'm not sure when this was disgorged - I'm guessing around 2011. I'm not sure I've ever tasted a pure Meunier of this age, so was interested to see how it had developed. This was purchased directly from the producer earlier this summer so I'm assuming it has been stored well.

Quite evolved and lifted (winespeak for a little volatile acidity*), with some of the original freshness of having made way over time for Tarte Tatin, seville orange and crystallised yellow fruits. There are some warmer, more oxidative notes of chestnut honey as well as this slightly fudgy, cashew butter character (something I've started to associate with Meunier).  After a while quite some quite lovely autumnal blackberry fruit comes through too. There's some sweet spice, coffee and vanilla, although it feels to me that the oak influence is felt more in the general style of the wine than through any overtly-oaky flavours jutting out. Honeyed and biscuity notes round off tangy palate that has (just) seen its best days, with some volatile notes of bruised apples and spice on the finish. There is complexity and personality here, although with this slightly oxidative style and low dosage it would probably have been at its best a couple of years ago. 89/100

It'd be interesting to compare this to some Meunier of a similar age that had been made in a fresher, more reductive style - something to look out for.

*winespeak for (predominantly) acetic acid....winespeak for a little vinegary. Sounds terrible doesn't it? It's often not, and in some wine styles it can hide quite well behind other aromas. However it's the sort of aroma that gets magnified in fizz and has to count against a wine if it's noticeable. Low-dosage wines with low sulphur additions at disgorgement are probably more prone to develop it during extended post-disgorgement ageing.
Labels: 2006 vintage Champagne epernay Grower Champagne Meunier