The world of wine isn't short of analogies, but I'm afraid I need to squeeze another one in. So...when it comes to Traditional Method Sparkling Wines, sometimes I think of choirs and soloists. The soloists are at one end of the scale - wines of a a single grape variety from a single vineyard in a single year. At the other end are the vast choirs of multi-vintage, multi-variety blends incorporating wines from hundreds of different sites, from the supermarket own-labels to the Grandes Marques.

When we listen to a soloist, we do it on their terms. We don't expect them to sound like a choir, but we do expect them to have something distinctive to say. A choir can engulf you with its variation in tone, range and texture, or it can be muddy and undistinguished, with just a  few sub-standard voices ruining a whole section. Choirs need strong direction in order to carve out a cohesive, unique sound.

I think it pays to have an idea of where on the scale the wine in your glass might fall. Unless you happen to find yourself in some kind of hard-nosed situation (such as blind-judging a competition), having some understanding of what a wine could be trying to achieve is probably more useful than subjecting it to a formulaic assessment. Context matters.

As Jonica Fox drove me around Fox&Fox's thirty-odd acres at Lakestreet, East Sussex, I was thinking just how much this was not Champagne. It's not even Nyetimber or Gusbourne, neither is it much like many of the other smaller vineyards I've visited here. I've heard visitors to English vineyards say I can't believe this is England! as they look out over soldierly rows with their trunks sticking out of razor-sharp strips of earth. Well, on this grey August day we were very much in England.

Tucked away amid the abundant hedgerow and woodland shelter that runs across the valley, the site's undulating sandstone and clay soils kept forcing the rows of vines to change tack at a moment's notice. As we looked out on this year's planting, Jonica explained that, as previous tenants of this particular patch, a happy herd of cows had left the ground primed for thistles as well as vines. Two students from Plumpton were out with strimmers doing battle when we arrived. Sometimes it feels like vines arrive and colonise a patch of land; here it feels like they've moved in quietly and politely.

Some of the vines at the top of the hill were still recovering from last year's frost, whilst those lower down were untouched. These higher vines, running up to about 120m above sea level, are actually the first to ripen, thanks to their consistent southern exposure - a reminder of just how important aspect is when it comes to viticulture this far North. Things were looking good despite the growing season taking a bit of a 'time out' during the second half of August. There was a particularly confident-looking patch of Chardonnay at the bottom of the hill that will go into the Blanc De Blancs Essence, the success of which has ensured its dominance amongst the new, tightly-spaced plantings.

The Foxes celebrate the individuality and personality of small parcels of grapes, sending their harvests across to Will Davenport each year to craft wines that are very much vintage-dependant and often dominated by one grape variety. I got a sense that, apart from perhaps the Mosaic, there are no recipes or grand blends here; just an annual effort to search out and present the best flavours of each vintage.

Knowing a few of the Davenport wines, the connection makes a lot of sense. The wines I've tasted all have a strong family resemblance; clarity of flavour, fine texture and little in the way of dressing-up. There is no oak used (apart from a little in the Midnight Rosé), and the wines are bottled unfiltered with pretty healthy periods of ageing both pre-bottling and on lees. Particular care is taken over dosages, which are totally unobtrusive and given time to integrate. These are unequivocally soloists, and very fine ones at that. 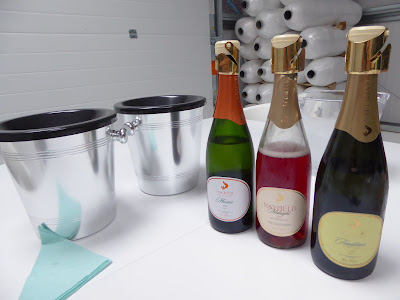 I tasted three wines at the vineyard - included is the note on Inspiration Pinot Gris from this previous post  and a new note for the 2014 Meunier.  I have some Essence in my cellar and will link it to this piece when I get a chance to drink it.

98% Pinot Noir, 2% Meunier. 25 months on lees, 9.5 g/l dosage. Crystal-clear redcurrant fruit with sweet papaya and honeysuckle. Just a touch of meatiness and dried herbs, but not a great deal of development yet. Tightness landing on the right side of tartness on the palate (2013 was a cool, high-acid year) - the texture carries the acid. Persistence of flavour here - this feels like it has the integrity to get a few years behind its belt and really open up. Impressive.  89-92

Predominantly (I believe over 90%) Pinot Gris. Such aromatic interest here, with a tropical fruit salad (think kiwi, papaya, starfruit), zesty candied lemon and ginger, honeysuckle and just a little rose. It's not at all blowsy though - rather a very focussed, precise kind of exoticism. It's all about the impeccable, expressive fruit on the palate, with a lovely balance between the exuberance of the nose and a crunchy, very English zip (helped along by the small Chardonnay addition). Particularly fine, persistent mousse. Really love this, and it's drinking perfectly now. 91

95%Meunier, 5% Chardonnay. 34 Months on lees, 9 g/l dosage. Complex in a softly-spoken, quite elusive way; ripe citrus somewhere in-between pink grapefruit/pomelo/fresh orange, sweet red cherry and a very English crabapple jelly-like preserved fruit character. Also some tropical starfruit notes, and a little macaroon. Then fresh apple compote, gently spiced with nutmeg and cinnamon. It's bright but quite friendly on the palate; what impresses is a the intensity and length of candied citrus and the white pepper spice on the finish. Hides a lot of subtlety behind the freshness, and will develop well over the next 3 years. 90-93

50% Chardonnay, 50% Pinot Noir. 18 Months on lees, 8g/l dosage. A real charmer, all apple blossom and lemon tart on the nose. Youthful and taut with a little friendly fresh-almond sweetness mid-palate but also a little savour. Just a touch of bitterness/chalkiness. 88

100% Pinot Noir from the older Hobdens vineyard site. This bottle was disgorged summer 2016. 4 days' maceration on the skins of Pinot Noir from this small but intensely-ripe vintage has produced quite a deep and striking wine with strawberry shortcake and cranberry aromas, as well as more-developed pomegranate molasses, toast and cola. Still light-footed without too much extraction on the palate. At a lovely stage with vibrancy, complexity and balance. 90
Labels: Chardonnay English Sparkling Wine Fox & Fox Meunier pinot gris Pinot Noir sussex
Location: London, UK