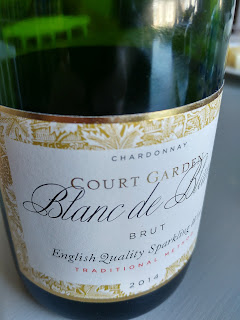 We visited this small producer in Ditching a couple of years ago and had a really good time. I'd recommend a trip  - it feels like a real family farming operation, in the best sense. It's a low-lying vineyard with a gentle (mostly) southerly aspect. The soils in this northern part of the Ditchling area are mostly clay at the surface. Indeed there's a pond and some groundwater about here - it's a very different place to grow vines than the chalky-hillside scene we often conjure up when we think of this part of the world. The 2010 Blanc De Blancs won the IWC English Sparkling Wine Trophy. Despite this, the Pinot-based wines grabbed me the most at the time, and I'll be looking for more of these. 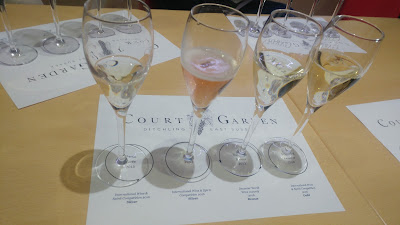 Court Garden have done a very good job at getting their wines into independents in London - I'm seeing them everywhere! They're sensibly-priced and the unashamed 'Englishness' of the labels sets them apart from the crowd on a wine shelf too.

Pours a very pale elderflower in the glass. This quite a softly-spoken wine, with fresh green apple and an interesting, faintly exotic melon character. The bottle promises lychees on the nose, which I can understand - I wonder if there's a musqué  Chardonnay clone in the blend? There's just a touch of pear tart richness lurking. The palate is all lemon and lime, sweet and sour, with marked acidity and a slim texture. I wonder if they'll hang on to some and disgorge it with a bit more time on lees - in any case, if you have some you could tuck it away for a year. 83/100