Larmandier-Bernier 'Longitude' and individuality in Champagne 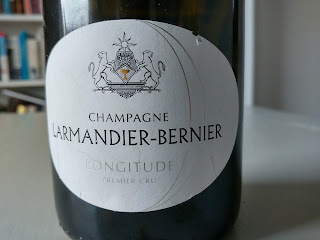 I love some of the big blended champagnes. The skill involved in assembling complex wines from hundreds of separate components is undoubtedly a wondrous thing. More often than not, however, I hanker for a dose of individualism in my glass; a chamber group rather than an orchestra, or a black-and-white etching rather than a floor-to-ceiling portrait. Grower champagne is a wine with no hiding place for mediocre components, nor any source of distraction from great ones.

Larmandier-Bernier farm fifteen hectares across the Grand and Premier Cru villages of the Côte Des Blancs. They're one of the more established terroir-centric grower champagne houses, having converted their vineyards to biodynamic processes during the 1990s at a time when most growers were riding high on the 1970s diet of generous herbicide/pesticide applications and dubious fertilisation practice. Why not grow low, sell high and let the cellar-masters worry about flavour, especially when you know they'd buy your grapes for the same price as everyone else's? As long as this model persists in some form, it's likely that the majority of the champagne vineyard will remain about as sympathetically-farmed as a supermarket car park.

Longitude comes from chardonnay grown in seven villages running in a rough North-South orientation, and represents the "pure, frank and mineral style" of the wines from some of the shallowest, chalkiest soils in the region (its sister cuvée, Latitude, is sourced from vineyards solely in Vertus, encompassing slightly richer lower-slope soils). I love that this bottle has spent a modest thirty months on lees in bottle; it's just right in this case. It's worth noting that it does spend almost a year on the lees of the first (natural yeast) fermentation, which may help with some of the non-fruit complexity and texture on offer. Additionally, this bottle has had eighteen months on cork, and will happily take that again.

There's a lovely, almost fino-like saline tang on the nose at first, with ripe apple, pear and toasty lemon/lime fruit following up. Sweet blossom and vanilla provide some lift and prettiness, both on the nose and surrounding the vivid citrus and stone fruit on the palate. It's a cliché but there is a grippy (dare I say chalk-like) texture that builds through the palate and delivers serious length. Such a balanced and invigorating wine, full of energy. 92/100